MONACO – SIGNING OF MEMORANDUM OF UNDERSTANDING WITH UNAOC 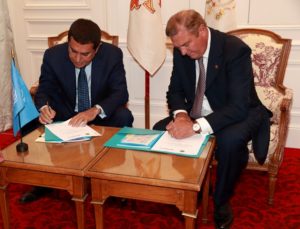 Monaco – On May 30th the ceremony for the signing of the  Memorandum of Understanding between the Constantinian Order of St. George, the Royal Order of Francis I and UNAOC (United Nations Alliance of Civilization) was held in the Winter Hall of the Hotel Hermitage. The Constantinian Order of St. George and the Royal Order of Francis I were represented by H.R.H. Prince Charles of Bourbon Two Sicilies, Head of the Royal House and Grand Master, while UNAOC was represented by its High Representative, H.E. Amb. Nassir Abdulaziz al-Nasser. The aim of the agreement is  to promote and improve interreligious and intercultural dialogue and education. 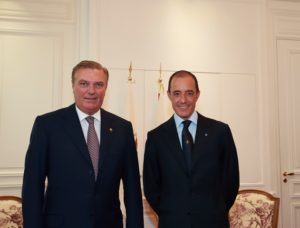 In his speech H.R.H. Prince Charles of Bourbon Two Sicilies spoke of the various philanthropic  and charitable activities carried out by the Knights and Dames of the Constantinian Order and the Royal Order of Francis I throughout the world. He specifically mentioned the donations for the hospitals in Rome, Nice and Monaco but also the financial aid that was so essential for the construction of hospitals in Tanzania and Uganda and for the restoration of churches and schools in the Caribbean. H.R.H. the Grand Master also spoke of “Crumbs of Health”, the project that the Sicilian Delegation established five years ago, in cooperation with various local bishops. This project has been a great success: every month knights, dames and volunteers provide more than 2 tons of food, clothing  and products for children ages 0 to 3 years who live in conditions of poverty.

The Constantinian Order has delegations in Italy, in the majority of European countries, in the United States and South America and cooperates with the Holy See (more than 35 Cardinals are members of the Order). In 2011 the Constantinian Order was recognized by ECOSOC (United Nations Economic and Social Council) and accorded Special Consultative Status.

While the Constantinian Order has maintained its Roman Catholic connotation since it was founded (by Constantine the Great in 312), the Royal Order of Francis  I is granted for merits to representatives of the government, the military, diplomats and the clergy as well as those who have distinguished themselves in the field of science, art, the humanities and literature.

H.R.H. the Grand Master mentioned some of the most influential individuals who have been awarded this decoration, including: Anglican Archbishop Desmond Tutu, winner of the Nobel Peace Prize in 1984, H.R.H. Princess Benedikte of Demark, Baroness Margaret Thatcher, the current president of the Republic of Kosovo and the President of Mauritius H.E. Ban Ki Moon and Mme Rigoberta Menchù Tum, winner of the Nobel Peace Prize in 1992.

The ceremony concluded with the investiture of H.E. Nissir Abdulaziz Al-Nasser as Knight Grand Cross of the Royal Order of Francis I and Mme Muna Rihani Al-Nasser as Dane Commander. Mme Al-Nasser is President of the United Nations Women for Peace Association which Her Royal Highness Princess Camilla of Bourbon Two Sicilies represents as “Peace Ambassador” because of her involvement in the defense of women’s rights throughout the world. 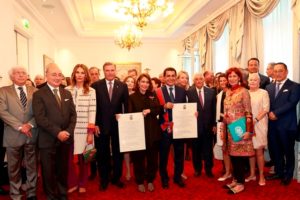 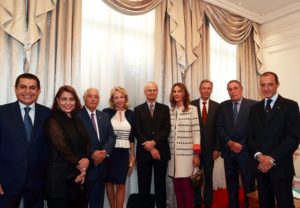 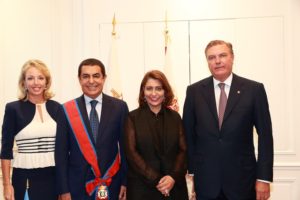 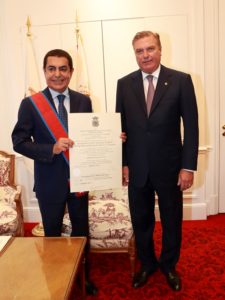