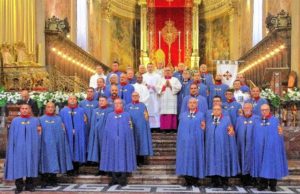 On June 10 the ceremony of investiture welcoming the new Knights and Dames of the Constantinian Order took place in the Cathedral of Maria Santissima Annunziata in Acireale.

The ceremony was officiated by H.M.R. Mons. Antonino Raspanti, Bishop of Acireale, at the request of His Eminence the Cardinal Grand Prior.

The Vice Delegate first thanked Mons. Raspanti and then read the letter sent by H.R.H. Prince Charles of Bourbon Two Sicilies, Duke of Castro, Head of the Royal House and Grand Master, congratulating Mons. Raspanti for his recent appointment as President of the C.E.I. (the Italian Episcopal Conference) for Southern Italy. Nob. Dott.  Antonio di Janni then spoke of the many and varied charitable activities that are carried out throughout the island, concluding with what is now the motto of the Sicilian Knights “To be Rather to Seem”, meaning that a Knight must become personally involved in the numerous benevolent activities and must always fight for the Catholic faith.

At the conclusion of the religious ceremony the knights paid homage to the statue of the Blessed Pius IX, founder of the Diocese of Acireale, before proceeding to the shelter of Madonna della Tenda di Cristo where they brought their monthly donation of food for the residents.  The facility welcomes and cares for single mothers and their children. 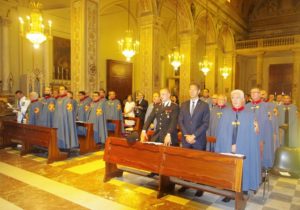 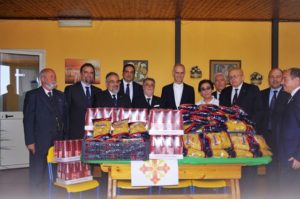 Tweet
Previous articleMONACO – SIGNING OF MEMORANDUM OF UNDERSTANDING WITH UNAOC
Next article VENICE – JUNE 10, 2017. CEREMONY OF INVESTITURE IN THE PATRIARCHAL BASILICA OF SAINT MARK