MONGIANA – CLOTHING DONATION TO THE NEEDY 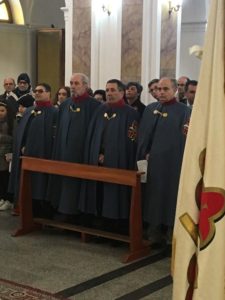 Mongiana, 26 February 2017 – The bond between the Delegation of Calabria and the community of Mongiana becomes increasingly stronger. Following the inauguration of the Weapons Factory Museum (MUFAR) in this little town, a ceremony that took place in the presence of local dignitaries and H.R.H. Princess Beatrice of Bourbon Two Sicilies, Grand Prefect of the Order, the activities carried out by the Knights and Dames to help the less fortunate of the territory has become a constant.

On February 26, at the conclusion of Holy Mass the parish priest of the Church of Santa Maria delle Grazie, Don Martin Grogue, and the town Mayor, Dott. Bruno Iorfida, publicly acknowledged and thanked the Delegation for its valuable support.

The Delegation also presented a donation of a significant amount of clothing to the Diocese.

On this occasion the Vice Delegate for Calabria also informed of the appointment of Cav. Pasquale Zavaglia as Representative for the Royal Site of Mongiana.