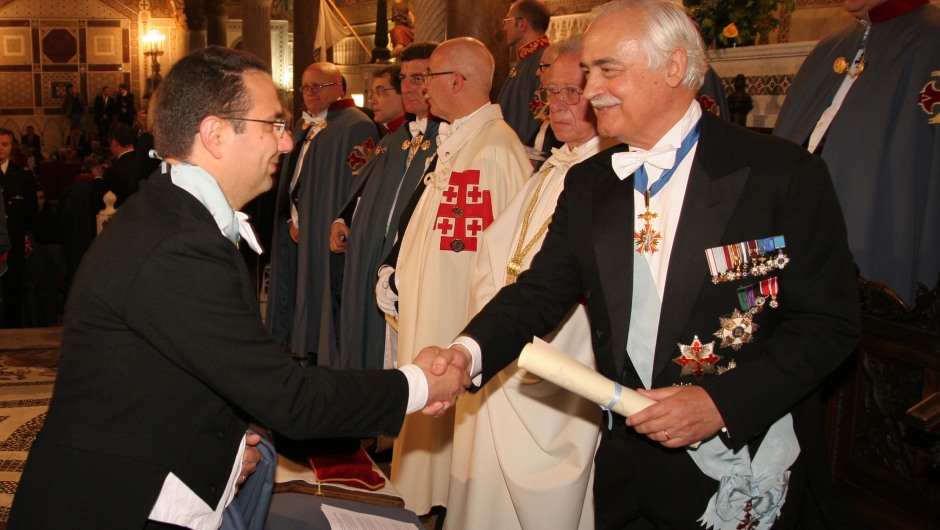 Palermo, 12 May 2011. In the magnificent scenery of the Palatine Chapel in Palermo’s Norman Palace, the annual ceremony of investiture of new Knights and Dames of the Sacred Military Constantinian Order of Saint George took place on Saturday May 14, chaired by His Most Revered Eminence Cardinal Renato Raffaele Martino, Grand Prior of the Order and Chairman Emeritus of the Pontifical Council for Justice and Peace of the Holy See. His Eminence Martino was accompanied by the Secretary General of the Constantinian Order, Ambassador Giuseppe Balboni Acqua. Presented by the Deputy Head of Delegation of Sicily, the Noble Dr. Antonio di Janni, neo Knights have implemented the new religious rite of investiture, which recalls the ancient one by Emperor Constantine the Great to defend the Sacred Banner which reproduces the cross and the monogram of Constantinian Cross, and the monogram of the first two greek letters in the word Christ. On this occasion the celebrant before the kneeling candidate and holding the hand up to him, pronounces the phrase “in accordance with the mandate received by His Royal Highness Prince Charles of Bourbon Two Sicilies, Duke of Castro and Grand Master of the Order, I set you and I proclaim you Knight of the Sacred Military Constantinian Order of Saint George. ” The Cardinal Grand Prior and then touches his hand with the right shoulder of the Knight completing the formula with the blessing “in the name of the Father, Son and Holy Spirit.” The new investiture ceremony reminiscent of the old medieval knights kneeling: During that ceremony were mentioned St. Michael and St. George and was eventually pronounced the formula of the invitation to stand with the words “there rise a knight.” The hand placed on the shoulder of the inducted – signifies the decision to help the new knight along the way of his heartfelt and convinced profession of faith and to accompany him by facilitating his entry into the community of the Knights Brothers. HIs most Revered Eminence Cardinal Renato Raffaele Martino has therefore urged to arrange “not just ceremonies and beautiful uniforms with capes but concrete initiatives of solidarity to ignite hope and help the most vulnerable and often forgotten people in the world. ” The religious ceremony was then followed by a gala dinner in honor of His Eminence the Cardinal in the splendid rooms of Villa Niscemi. The next day, Sunday, May 15, His Most Revered Eminence Cardinal Martino accompanied by Ambassador Balboni Acqua, by the Deputy Director di Janni and by the Knight Como, visited the Archbishop of Palermo, His Most Revered Eminence Cardinal Paolo Romeo, who entertained the guests for over an hour in a long and cordial conversation. So His Eminence Martino went to the residential complex of the Regional Command of the Carabinieri of Sicily where he presided over the Eucharistic celebration in the Church of St. Mary Magdalene (twelfth century), giving a high Constantine honor to General Commander Riccardo Amato. In the various meeting opportunities it was recalled with emotion the unforgettable visit of Pope Benedict XVI in Palermo on 3 October 2010 and the words addressed to the Sicilians and the Palermitani on that occasion: “Your beautiful island was among the first regions’ in Italy to accept the faith of the Apostles to receive the proclamation of the Word of God, to adhere to the faith so generously that even in the midst of difficulties and persecutions the flower of Holiness has always sprouted. Sicily was and is a land of saints as members of every condition of life who lived the Gospel with simplicity and integrity. To you, the faithful laymen, I repeat: do not be afraid to live and bear witness to the faith in the various sectors of society, in many situations of human existence, especially in the difficult ones! “