PIEMONTEAND VALLE D’AOSTA – ACTIVITIES DURING THE MONTH OF MARCH 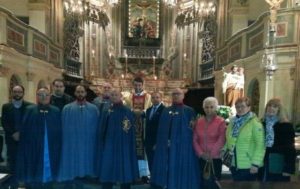 In March the Delegation of Piemonte and the Valle d’Aosta also diversified  the activities performed by the Knights and Dames in various cities.

On Monday, March 20,  the Delegation of Alessandria commemorated the  death of H.R.H. Prince Ferdinand of Bourbon Two Sicilies, the LIII Grand Master, and all the deceased of the Order, in accordance with the instructions contained in chapt. IX of the By-laws.

The memorial mass was celebrated by the Chaplain of the Delegation, Don Augusto Piccoli, Knight of Ecclesiastical Grace.

In agreement with the Vice Delegate of the Piedmont Region, Dott. Mario Baschirotto, funds were collected during mass  to be used to purchase food items for the poor. The items will be distributed by a special “center” opened in the Parish of St. Lorenzo of Alessandria.

This initiative complies with the instructions of the Grand Master, H.R.H. Prince Charles, for the program “The Hunger of our Neighbor”, to support the families most harshly tested by the crisis.

On Friday, March 24, in the premises of the former slaughterhouse of Vercelli, now converted into a Caritas Community Center, the Vice Delegate, jointly with the Representative for Vercelli and Novara, Avv. Gianpaolo Fabrizio Nucera, gave to the director of the center, Mr. Bertozzi, a significant quantity of food items to be donated to the poor of the city.

Saturday 25 March,  a great number of Knights and Dames attended Holy Mass organized by the Association Regina Elena in the Basilica of Superga, in Torino. The mass was attended by Representatives of the Dynastic orders of the House of Savoy, the Guards of the Pantheon and many civilian and military authorities.