SICILY – COMMEMORATION OF THE VI CENTENNIAL OF ST. FRANCIS OF PAOLA 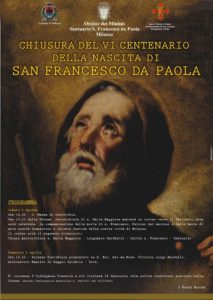 Palermo, April 2, Solemnity of St. Francis of Paola. The celebratory year commemorating the VI centennial of the patron saint of the Kingdom of the Two Sicilies was concluded in the church of St. Francis.

At the conclusion of the religious ceremony, the Vice Delegate, Nob. Antonio di Janni, conveyed the greetings of H.R.H. Prince Charles of Bourbon Two Sicilies, Duke of Castro, Grand Master and Head of the Royal House, as well as those of His Most Rev. Eminence Cardinal Renato Raffaele Martino, Grand Prior and the Prior for Sicily His Most Rev. Eminence Mons. Michele Pennisi, Archbishop of Monreale.

The Vice Delegate also reiterated the commitment of the Sicily Delegation to continuing the project Crumbs of Health in the church of St. Francis of Paola.

On the same day, several Sicilian Knights and Dames participated in the ceremony held in the Sanctuary of St. Francis of Paola in Milazzo.

The Eucharistic Liturgy was presided by His Most Rev. Eminence Mons. Vittorio Luigi Mondello, Archbishop Emeritus of Reggio Calabria – Bova, Knight Commander of Ecclesiastical Grace. For the occasion the Constantinian Knights acted as honor guard for the Relic of the Mantle of the Saint during the procession toward the Sanctuary.