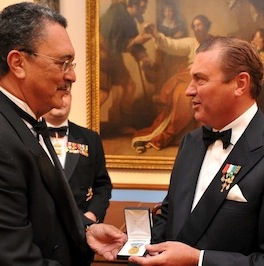 London, July 2012. The Honourable Kenny Anthony, Prime Minister of Saint Lucia, and Chairman of CARICOM – the Caribbean Community Secretariat, has been awarded the Gold Benemerenti Medal of the Sacred Military Constantinian Order of St George. The award was made in recognition of his contribution to public life and charitable endeavour. It was presented by HRH The Duke of Castro, Grand Master of the Constantinian Order, in a ceremony held in London on 28 July 2012 attended by over 250 leading royal, state, religious and diplomatic personalities from across the world.