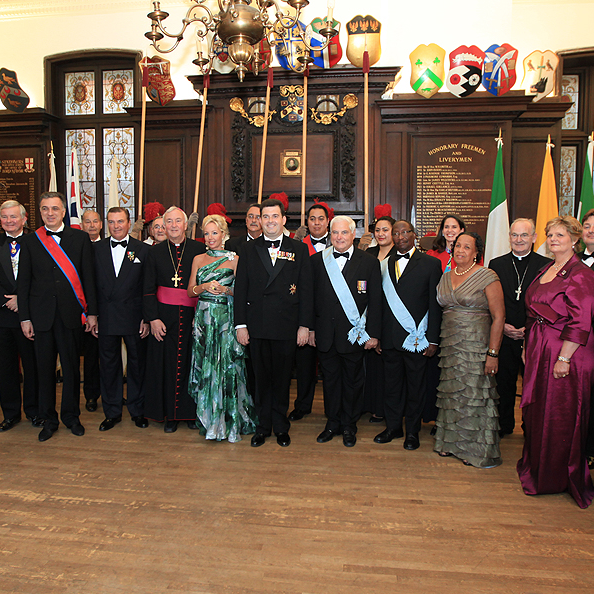 London, 28 July 2012. “Faith in Sport” Royal Gala Dinner to celebrate 2012 London Olympics was held at the historic Stationers’ Hall, close to St Paul’s Cathedral in the City of London.

Over 250 knights, dames and medalists attended including nine senior statesmen from Europe, Latin America, Asia, and the Caribbean who had earlier been invested into the Order by the Grand Master.

The Sub Prior of the Order’s Delegation, The Most Reverend George Stack, Archbishop of Cardiff, opened the evening with prayers for the Pope, Queen and the Order.

The Delegate for Great Britain and Ireland and host, HE Mr Anthony Bailey, delivered a welcome address which included an overview of the activities of the Order and its relevance to the Olympic Games.

The Delegate read messages which had been sent to the Delegation Council by HM The Queen, HE The President of Ireland and the Rt Hon The Lord Mayor of the City of London, Alderman David Wootton.   Messages from other world leaders were received including from HE The President of the Republic of Bulgaria, HMEH Fra Matthew Festing, Prince and Grand Master of the Sovereign Order of Malta, HRH The Duke of York, HRH The Duke of Gloucester and HRH Prince Hassan bin Talal of Jordan.

The Guest Speaker was His Grace The Most Reverend Vincent Nichols, eleventh Archbishop of Westminster and Chaplain of the British and Irish Delegation. Archbishop Nichols delivered a thought provoking insight entitled ‘Faith in Sport’.

The Loyal Toast to The Queen was proposed by the Grand Master, HRH The Duke of Castro. The Loyal Toast to The President of Ireland was proposed by the Vice Delegate for Ireland, Professor Richard Conroy. HE Ambassador Balboni Acqua, Secretary General of the Royal House of Naples proposed the Toast to other Sovereigns and Heads of State present at the dinner and represented through Ambassadors at the dinner. A Vote of Thanks was offered by the Order’s Delegate Emeritus for Great Britain and Ireland, Lord Brennan of Bibury.

A Guard of Honour by the Company of Pikemen and Musketeers of the Honourable Artillery Company, Body Guards to the Rt Hon the Lord Mayor of the city of London were on parade by permission of the Captain Commanding.

The London Banqueting Ensemble under the direction of Steven Fletcher performed the evening’s music programme.