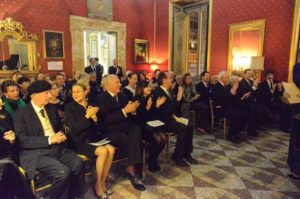 Rome, 3 December 2016 –The Rome and Lazio Delegation, represented by the Delegate, and assisted by the Vice Delegate for the city of Rome, Count  Riccardo Langosco di Langosco and by the Counsellor for Cultural Events, Cav. Fabiano Forti Bernini, organized a benefit concert for the victims of the earthquakes in the Marche and Lazio regions.

The concert was held in the splendid  setting of Palazzo Ferrajoli, overlooking the magnificent Piazza Colonna. Guests were accommodated in the candlelit Pius IX Hall to enjoy a piano concerto of music for four hands by Mozart, Rossini and Grieg,  performed by Maestro Diego Benocci and Mala Chistiakova, who performed gratis. The public greatly enjoyed the enthralling execution  and encore as well as the choice of lively selections. Following the performance the Knights, Dames and their guests moved to the Gigli Hall for dinner. 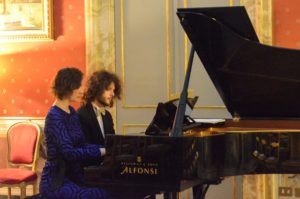 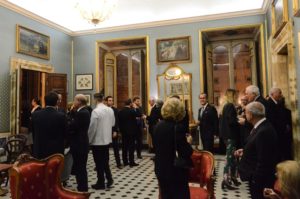 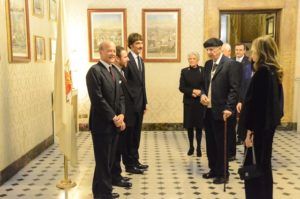