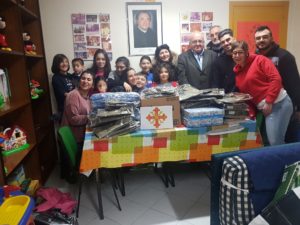 On January 18th, the Vice Delegate, accompanied by a volunteer, Mrs Lia Giangreco, delivered many products for early childhood to the community “La Casa del Sorriso” in Monreale. The structure, which has been operating in the territory for 50 years and is headed by the Capuchin Father Francesco Biondolillo, hosts 30 children. Clothes, diapers, pasta and shirts were delivered.

Rooted in the territory of Monreale, “La casa del sorriso” celebrates the 50th anniversary of its foundation. Father Clemente Calogero Giadone and Father Francesco Biondolillo’s efforts in favor of children in difficulty allowed the realization of a program whose main values are solidarity and legality. Today our Order has approached this reality with the intention of supporting it through the project “Briciole di Salute”  After the meeting between the Vice Delegate and Father Biondolillo, the Sicilian delegation has begun to collaborate with the structure. The first intervention of the delegation took place thanks to Dr. Simona D’Alba, dentist, who visited the children of the structure and gave a class on dental prevention. 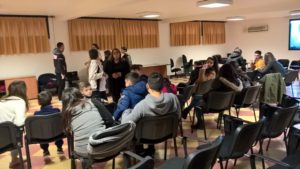 Tweet
Previous articleCAMPANIA: SOLEMN MASS AT THE BASILICA OF SAINT CLARE
Next article TUSCANY: DONATION FOR THE PROJECT “ALBAROSA”