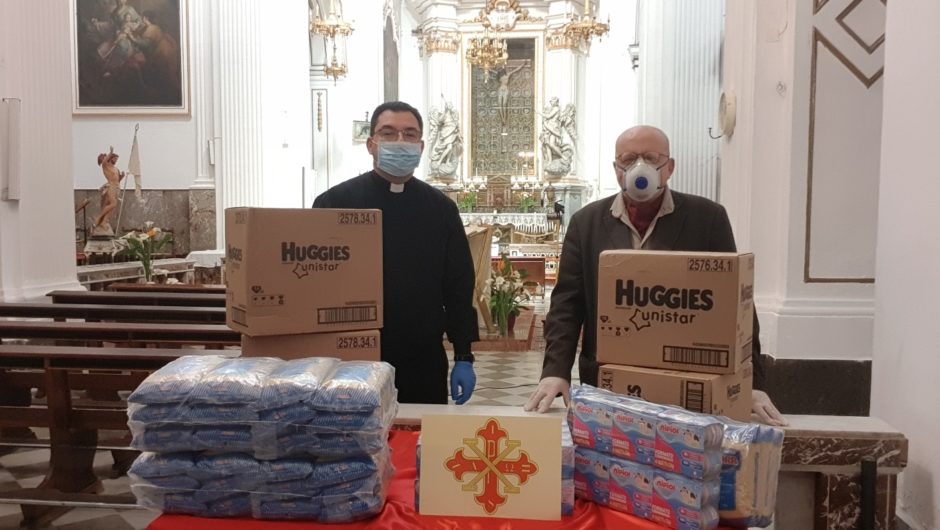 SICILY: THE ACTIVITIES OF THE PROJECT “BRICIOLE DI SALUTE” CONTINUE IN CARINI, PIAZZA ARMERINA AND BALESTRATE

A distribution of products for children took place on April 24th at the major church of Carini. The vice delegate delivered to Father Giacomo Sgroi, archpriest of Carini, several supplies of diapers and homogenized. Food was therefore distributed to around 400 needy people.

On the anniversary of the feast of St. George, Father Dario Pavone celebrated a mass in his honor on Facebook in the presence of Knight Marco Milazzo at the Church Saint Stephen in Piazza Armerina.

Mr. Francesco D’Alba, president of the Constantine Cross Onlus of Sicily, the representative of Balestrate Mr. Piero Spezia and Marquis Amari handed over to the mayor of Balestrate dr. Vito Rizzo, to the municipal councilor Mrs. Maria Saputo and to the councilor Mr. Pietro Taormina, many food packages which will be distributed by the civil protection to the needy people of Balestrate.

Tweet
Previous articleLOMBARDY: DONATION OF MASKS IN COMO
Next article LOSS OF THE GRAND MASTER OF THE ORDER OF MALTA