VENICE – JUNE 10, 2017. CEREMONY OF INVESTITURE IN THE PATRIARCHAL BASILICA OF SAINT MARK 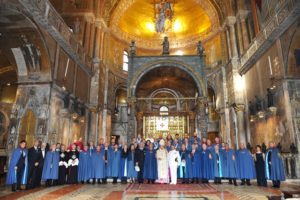 Venice. The investiture ceremony for new Knights and Dames of theTriveneto region was held on June 10 in the stupendous site of the Patriarchal Basilica of St. Mark the Evangelist in Piazza San Marco in Venice. The ceremony was organized by Delegate Count Roberto Giustiniani and by Vice Delegates Nob.  Federico Bulfone Gransinigh and Knight Commander Lucio Pasqualetto.

In his homily the Grand Prior spoke of the participation and commitment of the knights and dames of our Order and what they can do to improve the society and environment in which they work, highlighting the importance of defending and exalting the Christian Faith, aiding the needy and exemplifying the principles and teachings of Christianity. His Most Reverend Eminence concluded by outlining the mission of each Delegation to carry out charitable activities  to aid the needy and at the same time to support the training of knights and dames and new members by conducting cultural and religious training sessions.

Present at the ceremony were H.E. Prince Ruspoli, Grand Chancellor, H.E. Nob. Dott. Alberto Lembo, Grand Inquisitor, as well as numerous civilian and military authorities of the Triveneto Region. Also present were representatives of the Sovereign Military Order of Malta and the Order of Saint Mauritius and Lazarus.

At the conclusion of the investiture ceremony and following the cultural events that included a tour of the Basilica and of a temporary art exhibit in the Museum of Glass on the island of St. George, the Triveneto Delegation, on behalf of its members, made a donation to Monsignor Meneguolo, Knight Commander of Ecclesiastical Grace, to be used for the needy families of the diocese. 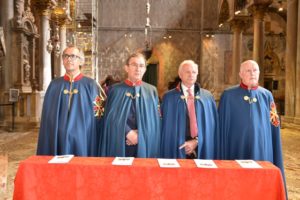 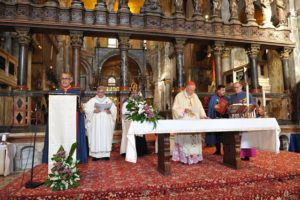