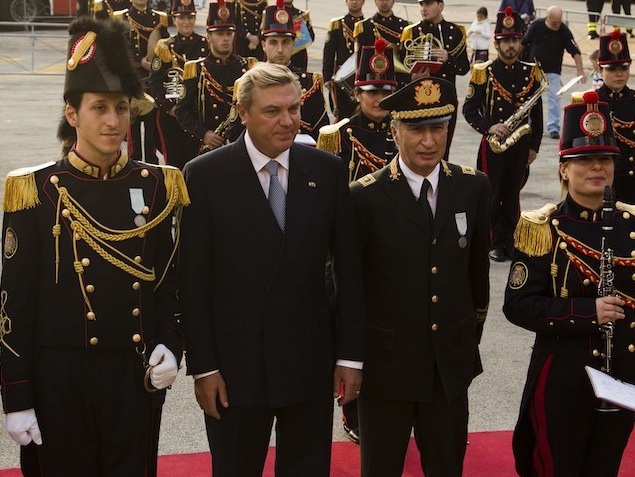 Naples, 26 October 2013. On Friday 25th and Saturday, October 26, 2013 HRH Prince Charles of Bourbon was in the city of Naples, the ancient capital of the Kingdom of the Two Sicilies where his ancestors were sovereigns until 1861.

On the Friday, the Local Delegation of the Knights and Dames of the Sacred Military Constantinian Order of St. George held a solemn Mass at the Pontifical and Royal Basilica of San Francesco di Paola overlooking the Royal Palace in, Piazza del Plebiscito, followed by the grand opening of a clinic for the Poor in Naples.

The Marquis Don Pierluigi Sanfelice di Bagnoli, a member of the Royal Deputation of the Treasure of San Gennaro and CEO of the Dynastic Orders of the Royal House of Bourbon Two Sicilies Naples and Campania, organized a dinner for the evening in the presence of the Prefect of Naples, the President of the Region, the General Commander of the Interregional Forces DC, the Admiral Harbour Master and other local authorities.

On the morning of Saturday, October 26 HRH Prince Charles of Bourbon Two Sicilies visited the Basilica of Santa Chiara for a private tribute to the tombs of his parents and of the previous monarchs of his dynasty. He was escorted by the Guard of Honour at the Royal Tombs (an association of volunteers who perform a service of honor and order at the Chapel of the Royal Tombs).

In the afternoon, then His Royal Highness attended a series of events to commemorate the twentieth anniversary of the Movement Neoborbonico.

The Movement Neoborbonico is a great cultural association comprising of thousands of people from the regions of Southern Italy, which formed the territories of the Kingdom of the Two Sicilies, as well as some very distinguished names in the world of culture, art, journalism and from the national institutions.

Thousands of cheering participants welcomed Prince Charles and celebrated through his various activities.

At the General Headquarters of the Fire Department , His Royal Highness received homage by the Marching Band in the historic Bourbon Uniform and met the regional hierarchies of this ancient body devoted to the action of rescue and civil aid. Subsequently, the Prince visited the famous club “Historical Archives” which hosts an exhibition entitled ” History – Stories ” in the presence of the famous journalists Pino Aprile and Lorenzo Del Boca holding a conference. The evening continued at the ” Salvo D’Acquisto ” Theatre (600 seats sold about 100 seats standing,) where nationally renowned artists took turns to celebrate the Titles and Records of Southern Italy, and where take the first edition of ” Prize of the Two Sicilies ” for the excellence of the South has taken place (culture, music, theater, sports, entrepreneurship).