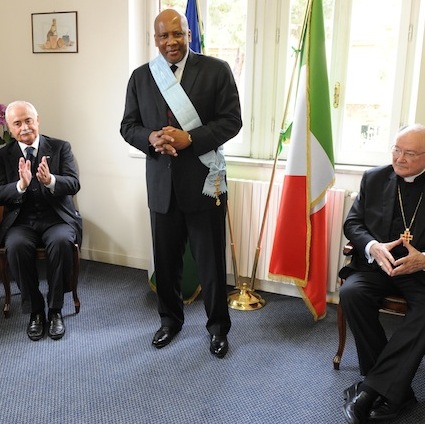 King of Lesotho invested into the Order

Rome, 8 October 2013. His Majesty King Letsie III of the Kingdom of Lesotho, the last reigning Roman Catholic monarch in Africa, was invested as a Bailiff Grand Cross of Justice of the Sacred Military Constantinian Order of St George. His Majesty’s investiture into the Constantinian Order took place at the Embassy of the Kingdom of Lesotho to the Italian Republic in Rome and was conducted by His Eminence Renato Raffaele, Cardinal Martino, Grand Prior of the Sacred Military Constantinian Order of St George. The investiture took place as part of the wider visit of the southern african monarch official visit to His Holiness Pope Francis at the Apostolic Palace, Vatican City.

Her Majesty Queen ‘Masenate Mohato Seeiso of Lesotho attended the ceremony together with senior ministers of His Majesty’s Government in Lesotho. The Grand Magistry of the Constantinian Order was represented by His Excellency Ambassador Nobile Giuseppe Balboni Acqua, Secretary General of the Dynastic Orders of the Royal House, HE Mr Anthony Bailey, OBE, GCSS, Grand Magistral Delegate for Inter-Religious Relations and Dr Alberto Calafato Janelli, Private Secretary to TRH the Duke and Duchess of Castro.

In his speech, HE Mr Anthony Bailey outlined the reasons for the granting of the awards: “Your Majesty’s faith inspired contribution to furthering the constitutional and peaceful transition to coalition government, Your dedication to promote the principals of your Roman Catholic faith, your efforts to promote inter-religious harmony among the followers of all faiths in Lesotho and in recognition of your dynasty and your Government’s leadership in promoting public service and charitable endeavour are among the reasons for the Grand Master decision to grant you this singular high honour.” Click here to download HE Mr Anthony Bailey’s full speech.

In his acceptance speech the King of Lesotho paid tribute to the work of the Constantinian Order and made special reference to its activities in the field of charity, humanitarian and hospitaller assitance. The King, who celebrated his 50th birthday in 2013, invited the Grand Master and other senior figures of the Constantinian Order to visit Lesotho and to launch further programmes of charitable activities in his country. The Grand Master and His Majesty spoke by telephone after the ceremony. The Minister of Foreign Affairs and International Relations of Lesotho, HE Hon Mohlabi Kenneth Tsekoa, offered a vote of thanks and paid tribute to the work of the Constantinian Order and thanked it for recognising the efforts which the Monarchy and the Lesotho Government has undertaken in the country through its social and humanitarian programmes. Among such programmes being Sentebale which was established by the King of Lesotho’s brother, HRH Prince Seeiso Bereng Seeiso and HRH Prince Henry of Wales.

Following the investiture ceremony which was attended by over 80 leading Italian, Lesotho and African personalities, the Ambassador of the Kingdom of Lesotho to the Italian Republic hosted a luncheon in honour of the King and Queen and The following awards were also granted by decree of the Grand Master.

– His Royal Highness Prince Seeiso Bereng Seeiso of the Kingdom of Lesotho, Knight Grand Cross of Justice of the Sacred Military Constantinian Order of St George

– The Right Honourable Motsoahae Thomas Thabane, Prime Minister of the Kingdom of Lesotho, Knight Grand Cross of the Royal Order of Francis I

– The Honourable Mothejoa Metsing, Deputy Prime Minister and Minister of Local Government and Chieftainship of the Kingdom of Lesotho, Knight Commander of the Royal Order of Francis I

– The Honourable Thesele ‘Maseribane, Minister of Gender and Youth, Sport and Recreation of the Kingdom of Lesotho, Knight Commander of the Sacred Military Constantinian Order of St George