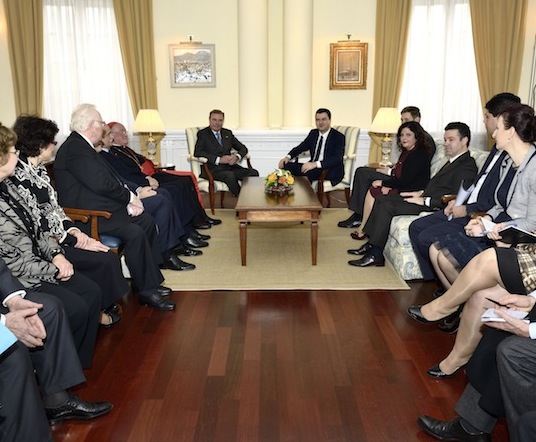 His Royal Highness arrived at the VIP terminal of Tirana’s Mother Tereza International Airport and was received by high level state, official and diplomatic representatives.

On 2 December 2014 the Grand Master and Grand Prior delegation visited a number of dignitaries including HE Mr Bujar Nishani, President of the Republic of Albania, HE Mr Lulzim Basha, Mayor of Tirana and Leader of the Opposition, HE Prof Dr Sali Berisha, former President and former Prime Minister of the Republic of Albania, HRH Crown Prince Leka Zogu II, Mr Selim Buca, Head of the Muslim Community and Baba Edmond Brahimaj, Spiritual Head of the Bektashi Order. The Duke and Cardinal visited numerous places of interest including the historic Et’hem Bey Mosque. On 3 December 2014 the delegation paid courtesy calls on HE Massimo Gaiani, Ambassador of the Italian Republic to Albania, HE Archbishop Rrok Mirdita, Catholic Archbishop of Durrës-Tiran , and the Primate of Albania and the head of the Albanian Orthodox Church His Eminence Archbishop Anastasios of Tirana, Durrës and All Albania.

During the visit the Duke and Cardinal laid flowers at the Tomb of the National Soldiers and also in the Royal Mausoleum of the Albanian Royal Family.

At the conclusion of the visit the Grand Master and Grand Prior visited the historic city of Kruja with its panoramic views of the Adriatic coast line and home to the Castle and Museum of Skanderbeg which featured many historic documents outlining the close ties between the Royal House of Naples and Albania.

Among those accompanying the Grand Master and the Grand Prior on the visit to Albania where HE Ambassador Nobile Giuseppe Balboni Acqua, Secretary General of the Royal House, HE Mr Anthony Bailey, Delegate for Great Britain & Ireland and Grand Magistral Delegate for Inter-Religious Relations, Dr Alberto Janelli, Private Secretary to HRH The Duke of Castro and delegation members Cyril and Lorna Woods of Slane and Mr and Mrs Nadhmi Auchi.