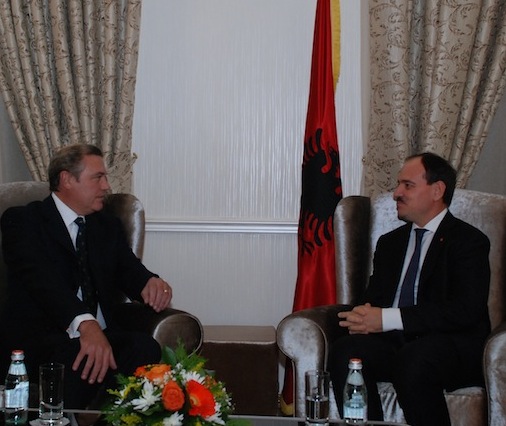 Tirana – December 2013. On the occasion of the visit to Albania of the Grand Master and Grand Prior, His Excellency Mr Bujar Nishani, President of the Republic of Albania, held an investiture ceremony at the Presidential Palace in Tirana. This event celebrated the centuries old historic ties between Albania and the Sacred Military Constantinian Order of St George and the Royal House of Naples.

HRH Prince Charles of Bourbon Two Sicilies, Duke of Castro, was presented with Albania’s highest national honour – the Order of George Kastrioti Scanderbeg ‘In high recognition of his rich social, philanthropic and humanitarian activity and for his conspicuous and successful personal engagement in administering charitable, humanitarian and spiritual activity of the Sacred Military Constantinian Order of St. George’. HE Renato Raffaele Cardinal Martino received the Order of George Kastrioti Scanderbeg “In recognition of his rich and successful career, of the unceasing activity and immense human and intellectual courage in service of peace, justice and fight against violence everywhere in the world.”

HRH Princess Camilla of Bourbon of Two Sicilies, Duchess of Castro was awarded The Order of Mother Teresa “For her notable humanitarian and charitable acts. A distinguished figure that has continuously supported the charitable and humanitarian associations and institutions including UNICEF and Red Cross.” Before the ceremony HRH The Duke of Castro, HE Cardinal Martino, HE Ambassador Balboni Acqua and HE Anthony Bailey attended a private meeting and talks with the Albanian Head of State, the First Lady and their key advisers.

Following the ceremony an official dinner was held at the “Sofra e Ariut” traditional restaurant in honour of the Constantinian Order delegation which was attended by over 100 persons including the President and First Lady of Albania, the Mayor of Tirana, HRH Crown Prince Leka II Zogu, Members of Parliament, religious leaders, ambassadors and heads of international NGO’s. Delegate Anthony Bailey offered a Vote of Thanks at the conclusion of the dinner on behalf of the Constantinian Order.

To download the Speech of HE Mr Bujar Nishani, President of the Republic of Albania click here.