SICILY – EASTER PRECEPT, WAY OF THE CROSS AND PALM SUNDAY 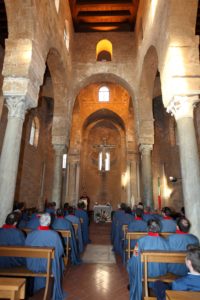 Palermo –  In view of the upcoming Easter festivities, the Sicilian Delegation is providing greater support to their various dioceses during this period that is so significant for the life of every Christian.

The Easter precept was inaugurated with a religious function in the small church of St. Mary Magdalen inside the military headquarters of Saint Giacomo, in Palermo. The Knights and Dames were welcomed by General Riccardo Galletta, Knight Commander of Merit and Commander of the Carabinieri Legion of Sicily.

On Friday, April 7, several Knights and Dames went to the Church of San Giuseppe al Palazzo in Messina to take part in the traditional Way of the Cross, led by the Rector, Mons. Mario di Pietro, Knight of Ecclesiastical Grace.

On the following day, a considerable number of Knights and Dames, led by Vice Delegate, Nob. Antonio di Janni, attended Holy Mass and took part in the procession through the streets of the city, led by H.R.E. Mons. Michele Pennisi, Archbishop of Monreale and Prior of the Delegation.

The typical procession through the streets of the city on Palm Sunday was also organized in the city of Castelvetrano (TP), where the Constantinian Knights were led by Don Rino Randazzo, Knight of Ecclesiastical Grace.

In addition to these activities, the Delegation continued its work in support of the less fortunate, once again implementing the project Crumbs of Health by distributing basic supplies for children ages 0 to 3 in Piazza Armerina on April 10 and in San Mamiliano in Palermo on April 13.